There are two ways that we hear sounds, the direct sound coming from the sound source and the reflective sounds, which provides localisation information, including where the sound source is and our distance from it. In audio mixing, we artificially create the illusion of a three-dimensional soundscape that replicates how we hear sounds.

What is three dimensional mixing

Three dimensional mixing in audio production involves spatially placing each instrument in the mix to create the illusion of height, width and depth.

In a good stereo mix, each instrument needs its own space in the stereo field to achieve clarity, balance and separation.

A mix lacking spaciousness sounds dull. Creating the illusion of a three dimensional space can instantly bring the mix to life.

It is the spatial layout of the instruments that create a three-dimensional mix. There are two basic approaches to spatial mixing. The first is depicting reality in the mix where all elements occupy real space on a stage.

The second is an artificial spatial constellation mostly done in popular music where the engineer decides the placement of each instrument.

Let’s break down each dimensions (width, height and depth), and how to achieve them in mixing.

What is width: Panning as left to right

Width’ is the left to right (stereo) placement of instrument in the three dimensional soundscape of your mix.

If you keep each instrument centre, you will have a crowded mix where the listener can’t hear each individual sounds.

Placing individual instruments in a particular spot within the stereo image helps create clarity and separation.

How to create width

Panning is the easiest way to achieve a wide stereo image mix.

There are a few rules of thumb to follow for panning to achieve clarity and width.

Firstly, keep the stereo image balanced by having an equal amount of elements and volume level on each side. Stacking all the instruments to one side will cause your mix to sound fatiguing and confusing to the ear.

More importantly, separate instruments with competing frequencies. If a piano and pad fighting for space, panning one to the left and the other to the right not only prevent masking but also creates width.

Contrast is a great way to achieve width. Take the example of the piano and pad, if you raise the octave of one, it will also give the illusion that they are wider apart.

Apart from panning, there are also creative ways to achieve width using the chorus, delay or doubler.

What is depth: Volume as front to back

When you listen to a song, you will notice some sound such as the lead vocals are out front while other sounds such as the backing vocals are in the background.

In the real world, you can instinctively tell how far away a sound source is with you eyes close by determining how loud the sound is, how bright the sound is, and the ratio of direct vs. ambient sound you hear.

Depth allows you to replicate this in mixing.

Sounds that are upfront in the mix are louder while distant sounds are quieter. Therefore the volume of a sound in the mix, affects the front to back placement.

How to create depth

The most effective and simplest way to place sound forward or backwards in the mix is with volume.

Lowering the volume put the sound in the background, and when you raise the volume the sound comes forward. To double the distance of a sound, decrease its volume by 6dB.

EQ also affects front-to-back placement. Removing high frequencies from a sound pushes it backwards in the mix. The more top end an instrument has, the brighter and closer it sounds.

The reverb is another way to add depth in the mix. When you use reverb, it is like you are placing the sound of a room in your mix. It helps the listener gauge how far away the sound is.

Make sure to chose a suitably diffuse reverb type because different types of sounds mask the reverb in different ways.

The reverberation time depends on the mix. For very busy mixes, a shorter reverb time is suitable. You can get away with adding more reverb to a mix with more space.

Adding an EQ after the reverb and removing the high frequencies is another common way of adding depth o the mix.

What is hight: Pitch as up and down

There are several reasons why this illusion exists. The usual placement of the tweeter on a speaker is above the woofer in a vertical array. Therefore our brain naturally equates high-frequency sounds with ‘high’ on a vertical scale.

The way sound travels also adds to this illusion. Low frequency travels through the floor and walls while high frequencies travel directly to our ears.

How to create height

We naturally hear high pitch sounds higher than low pitch sounds. Therefore when mixing, place the high frequencies instruments up high and the low frequencies ones down low.

Use harmony processors, pitch shifters or have the musician play their instrument at a higher/lower octave to change where the sound appears on the vertical scale.

As mixers, we mainly use the EQ to move a sound up and down – at least a little bit.

Reducing the high or low frequencies of some instruments will let the appear higher or lower in your mix.

But I say at least a little bit because no matter how much lows you add to a hi-hat or how much of the highs you remove, you won’t get it to rumble the floor.

By using these three known properties mentioned above, you can create a three dimensional mix. Use your volume faders, panpot, EQ and reverb to accomplish this.

The reverb allows you to create the illusion of a real space and the volume fade, panpot and EQ make you place each instrument in their own spot in that space so that the listener can identify each instrument without confusion.

previousUnderstanding Frequency: A Guide To Better EQ In Mixing
nextNo Mic Preamp in your home studio? The Best Mic Preamp To Get! 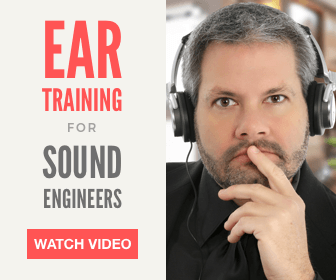